We are able to turn damp and wet cellars into usable space.

For simple storage space, a simple tanking system may be sufficient.

If intended as a habitable space or the level of ingress of water is measured in inches then a drainage system will give the best results.

It is essential that whatever the waterproofing solution selected, the resulting space has structural integrity as well as dry conditions. Our surveyors have the building knowledge to advise you on the correct solution for your special circumstances, contact us now.

I have an Edwardian property. The cellar was initially damp but over the past 18 months the water ingress had got worse culmulating in a foot of water gathering over a 24 hour period and continuing to fill after bailing. It reached the point where we were bailing out every night after work and the water was seeping through the brickwork at shoulder height. The space was obviously unusable and the stairs were rotting.
After explorations from the insurance company they confimed it wasn't dirty water but the ingress didn't seem to be related to rainfall and was untraceable.
Peter from Johnson Ellis came and took the time to understand the problems we were having and worked out the best solution. He also brought the manager from Wykmarol on site to determine the best approach to give us a dry storage space. The work was completed quickly, they always cleaned up after themselves every night and I had no hesitation in giving them keys so they could come and go as they pleased.
I now have a dry cellar, with a new floor & walls & lighting, a pump and alarm. It's a functioning storage space I don't have to think about anymore which is exactly what I wanted.

To arrest the inflow of water using a proprietary product flexible but resinous in nature. 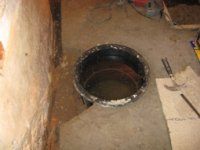 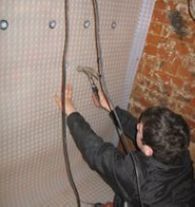 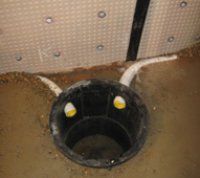 Drainage system and a pump are applied to the sump so that when the water on the sump reaches a predetermined level it is pumped to outside drains.

Plaster board is fixed over the membranes using special fixings which ensure the membrane remains intact and water proof. 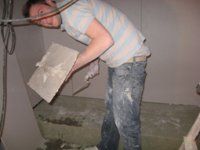 A plasterer gives the wall a final finishing coat.

A wet and damp cellar area , required by the client for useful storage space, this area contained 8 inches of water at the first site visit .
In this situation the client had drilled holes in the walls to let the water in, rather than risk the walls collapsing from pressure of water.
Tanking and proofing the cellar was unlikely to be effective ,owing the volume of water . A drainage system was required.

The cellar area flooded with up to 18 inches of water. The walls were very damp with heavy salt deposits